On Thursday night, Nick Mullens show cased his ability during a prime time match and came off a real winner. Due to the injury to C.J. Beathard, the third string quarterback for the San Francisco 49ers was given the starting role. Mullens could not have had a better start to his NFL career with 3 TDs and 262 yards. Sure it was against a Raiders defense that is missing a good pass rusher ad he was evidently well drilled by Kyle Shanahan but he still had to go out there and do his job. SO who is Nick Mullens and where did he came from? 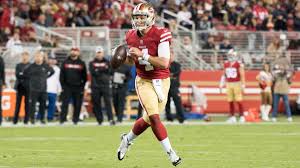 Well, when I started this story, Nick Mullens had freshly blown up in front of Oakland. And like usual I let this slid a little until it became irrelevant. So instead lets look ahead to what Nick Mullens is capable for the foreseeable future.

Next in the fire line is the New York Giants. And lucky for Nick, he gets to play them in primetime on Monday Night. With the 49ers naming him the starter once more, can we expect the same same numbers this week? For me, the numbers could go two ways. This game will be completely different to the Oakland game. So far this year, the Giants have basically employed a policy of throwing everything at the quarterback and hope to get to him before he can find the wide open receiver. As long as Kyle Shanahan can figure out ways to get the ball out of his new quarterback’s as fast as possible, Mullens should prosper.

Following this, there is a bye week for San Francisco followed by a trip to Tempa Bay to play the Buccaneers. With a high flying offence but struggling defense, it would be a good opportunity for Mullens to show case his abilities in what could be a high scoring game. this might be the best it gets as following this is two meetings Seattle, two games in San Francisco against Denver and Chicago and finally a trip to LA to face the Rams.

So the former Southern Mississippi quarterback has at least one more chance to showcase his skills if not two. Long term, Jimmy Garoppolo is the quarterback at the 49ers and will remain so. However, everyone loves a fairy tale story and this can be a fairy tale story for the remainder of the year. Let’s just hope it isn’t a short lived fairy tale.