With the 3rd overall pick of the 2018, the New York Jets selected Sam Darnold, quarterback out of USC. With this and the ongoing purging of the squad, the Jets have finally found a quarter back that they can build a team around Darnold to match his style of play. It is of the majority’s opinion, including my own, that Darnold should only see game time at the end of the 2018 season. This will allow him the time to adjust to the franchise while allowing the coaches to evaluate his abilities briefly in a real game to build for 2019. In theory, this make perfects sense. In reality, if a head coach’s job is on the line after a poor start to the season, why not give the fans what they want; the newly acquired franchise quarterback. Really, this story could be applied to any team that selected a quarterback in the first round of the draft. But I selected the jets as an example for a reason. 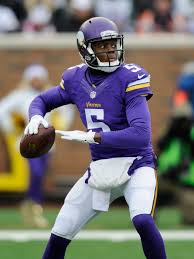 In the offseason, the jets signed Teddy Bridgewater for a grand total of $500,000 guaranteed. An exceptional piece of business from the Jets. A deal that may have been overlooked by many due to Bridgewater’s absence from the league over the past two years. But before his injury, Bridgewater had a pro bowl year while bringing the Vikings to the playoffs. The year before he was named starter within weeks of the league commencing (due to Matt Cassel’s season ending injury) and shined to make the rookie team of the year. However, he got injured and ended up sitting out the 2017 season and in 2018 threw 2 passes and recorded one interception. At the end of the season, the Viking passed on resigning him after they landed their new quarterback for the foreseeable future on a mega deal. And this is where we lie today; with the potential for a trilling quarterback battle on our hands. For someone who is so talented with NFL game time exposure, I am finding it hard to believe how he has been overlooked in his new environment.

At the age of 25 and entering the free agency next offseason, Bridgewater is in a good position. But he needs to prove himself this season coming. And to do that, he has to win the quarter back starter completion against Josh McCown, Christian Hackenberg and Sam Darnold (although it is unlikely that the jets will start him from week 1 regardless of his performance at camp). From that list, his biggest opposition is 38 year old McCown. So I’m going to make a bold statement, Teddy stays injury free for the season and lights New York up for the entire season. Jets decide they are happy with Darnold’s ability and unwilling to pay Teddy what he deserves resulting in a big deal to Miami or Cincinnati The NFL can be one of the most cut throat league’s in the world but it may pan out to be a mistake to let Bridgewater go or even go for free. Now it is up to Bridgewater’s to do it as planned.